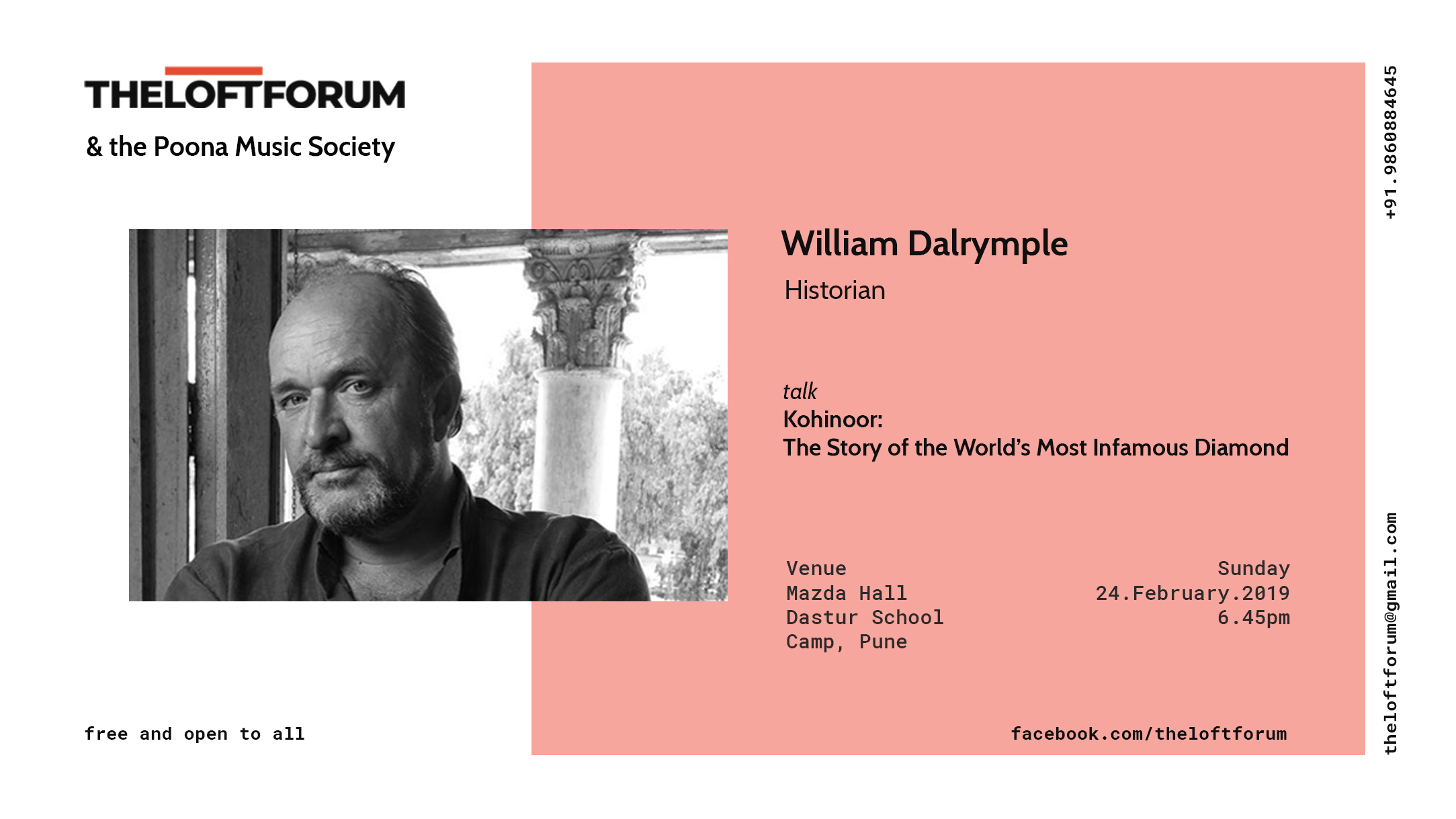 William Dalrymple is a Scottish historian and writer, art historian and curator, as well as a prominent broadcaster and critic. His books have won numerous awards and prizes, including the Duff Cooper Memorial Prize, the Thomas Cook Travel Book Award, the Sunday Times Young British Writer of the Year Award, the Hemingway, the Kapuściński and the Wolfson Prizes. He has been four times longlisted and once shortlisted for the Samuel Johnson Prize for non-fiction. He is also one of the co-founders and co-directors of the annual Jaipur Literature Festival. In 2012 he was appointed a Whitney J. Oates Visiting Fellow in the Humanities by Princeton University. In the Spring of 2015 he was appointed the OP Jindal Distinguished Lecturer at Brown University. In 2018 he was awarded the President’s Medal of the British Academy.

The Talk
Kohinoor: The Story of the World’s Most Infamous Diamond
On 29 March 1849, the ten-year-old Maharajah of the Punjab was ushered into the magnificent Mirrored Hall at the centre of the great Fort in Lahore. There, in a public ceremony, the frightened but dignified child handed over to the British East India Company in a formal Act of Submission to Queen Victoria not only swathes of the richest land in India, but also arguably the single most valuable object in the subcontinent: the celebrated Koh-i Noor diamond. The Mountain of Light.
The history of the Koh-i-Noor that was then commissioned by the British may have been one woven together from gossip of Delhi Bazaars, but it was to be become the accepted version. Only now is it finally challenged, freeing the diamond from the fog of mythology which has clung to it for so long. The resulting history is one of greed, murder, torture, colonialism and appropriation through an impressive slice of south and central Asian history. It ends with the jewel in its current controversial setting: in the crown of Queen Elizabeth the Queen Mother.

In Conversation \ Q&A ~
Following the talk Mr. Dalrymple will be in conversation with Vinutha Mallya, including a Q&A with the audience. Vinutha is an editor, publishing consultant and journalist. She is currently Features Assistant Editor with The Pune Mirror.

Special thanks to ~
The Poona Music Society are partnering with us for this event and we are grateful to them for the support they have provided. The Poona Music Society is a one-of-a-kind institution that fosters the love of music and has the most amazing annual calendar of events.
This talk would not have been possible without historian, and former Loft Forum speaker, Uday S. Kulkarni.

Please note ~
The venue of the talk is not the Loft Forum, but the Mazda Hall at Dastur School in Camp. Entry is from Col. Tarapore Road, opposite Ladies Club. There is no parking in the venue but plenty street side. There is no reserved seating. There will be time for book signings at the end. Some of Mr. Dalrymple’s books will be available for sale at the venue.